Sometimes it’s easy to forget that the concept of “autism” did not begin with glossy ad campaigns, blue light bulbs, and puzzle-themed bumper stickers. Though definitions have slowly adapted to become more inclusive in recent years, the vague outlines of terms like autism and schizophrenia can be traced back to the early 1900’s. Psychiatrist (and noted eugenicist), Paul Eugen Bleuler first used the term autism to describe states within schizophrenia itself. Decades later, Drs. Lorna Wing, Judith Gould, Hans Asperger, Leo Kanner changed things up — emphasizing the importance of social communication, social thinking, and social imagination and working to disconnect it’s previous link with schizophrenia.

They, along with many others, laid the groundwork for a diagnosis that would be considered unique unto itself. Though limited by the scientific knowledge and political climate of their time, this differentiation began dismantling the idea that parents were responsible for their children’s differences and instead attempted to shift the conversation toward natural (e.g. genetic) beginnings, awareness, and acceptance.

In recent years, the neurodiversity paradigm (not to be confused with the neurodiversity movement & related activism) has become an increasingly popular perspective. Having been adopted by a growing number of people, families, and professionals, those of us who have embraced it feel it more accurately describes our lived experiences.

Related terms neurodivergent and neurodivergence, originally proposed by Kassiane Asasumasu (Sibley), have helped support conversations even further, evolving the terminology to provide more a more inclusive vocabulary for this complex topic. With each linguistic and cultural advancement, it has become clear that autistic and similarly neurodivergent communities have always been here — whether our experiences had an official seal of approval or not. 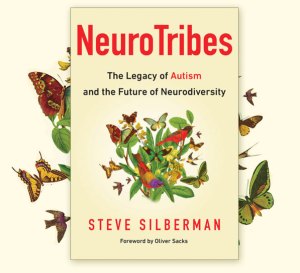 Our communities have been built upon unique histories and strategies, passed down through generations — yet it’s difficult to understate just how under-represented autistic and disabled people are in the general public consciousness. Authentic, first-person stories are not commonly shared in media, schools, research, or the workplace. To that end, I recently found myself re-reading the book, Neurotribes: The Legacy of Autism and the Future of Neurodiversity. Fair warning, it’s bigger than most textbooks I’ve ever owned, but it’s worth it. I wondered if it would have the same resonance as it did when it was first published almost two years ago — Spoiler Alert: it did.

While this is not a traditional book review (that would be a textbook in its own right), I thought it would be useful to highlight one sentence I think about often when it comes to the discussion of autism, disability, and our communities’ shared timelines:

This quote was perhaps the first time I could recall an author naming — and then grieving the loss of —  the uniqueness of the autistic knowledge and experiences across time. It recognizes that our communities have history, and due to the horrors of eugenics-based policy (paging Dr. Bleuler…), institutionalization, lack of recognition, access, support, and inclusive representation — huge chunks have been lost to time. But however bleak…there is hope.

Members of the autistic community now have increased access and support for sharing our own stories. Blogs, videos, keynote presentations, and books like Loud Hands, Autistic People Speaking by Julia Bascom and All the Weight of Our Dreams, presented by Lydia X. Z. Brown and the Autism Women’s Network, both featuring the work of additional autistic and similarly neurodivergent writers. Dr. Barry Prizant’s, Uniquely Human compleiments the work featured in Neurotribes and furthers these discussions from a family perspective — each work bringing a topic that was once considered niche to wider, more receptive audiences. The value of our personal and collective histories is being recognized and the pages of our books are still being written. Individuals, our families, friends, neighbors, coworkers, and professionals in the field each have unique stories to tell, and lucky for us we have more platforms than ever to share them.

Silberman, S. (2015). Neurotribes: The legacy of autism and the future of neurodiversity.

View all posts by knappocali